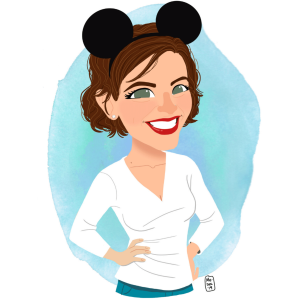 When I really start to think about it – 10K races may be my favorite distance. It’s just long enough that you really feel like you put in a decent amount of effort, you get a lot of time out on the course, but it’s not something that is a *huge* commitment to run.

You can take it as seriously or as non-seriously as you want! Recently, most of my 10Ks have been full of on-course shenanigans, and this race was no different.

This race was one that began in the morning, so it was a lot more like races at home! I laid out my “flat runner” outfit the night before, opting to advertise how my life is pretty much just one long vacation…

I do have to say I was nervous about timing. How early did I need to be in my corral? Was it going to be busier or easier than the night before? Would I run into anyone that I knew… or was I going to be all by myself?

I stopped at the coffee machine (more on that later) and picked up some espresso… and made the march over to the corrals. It was very similar, pretty much exactly the same, as the night before.

The pre-race entertainment was the same as the night before, and I still think it was very well done.

My ONLY issue before this race, other than the fact I was stupid early (my fault)… was HOW COLD IT WAS. I mean, I guess that’s also my fault because I could have paid better attention… but I was absolutely freezing waiting to start this race.

Since I was running on my own this race, I went up into my assigned corral… B. I still appreciated the information they provided for the opening/closing times of the corrals, I just should have taken them better to heart. People in France aren’t as crazy as people in Florida… you don’t have to be the first person in the corral to get a good spot to wait.

It was probably one of the nicer waiting experiences I have had in a corral – people weren’t freaking out about being in the front. Maybe it’s because they knew what the first little bit of the race was like? I’m not sure… but it was fine and I have no complaints.

But it sure was cold.

I think my big advice for runDisney runners transitioning from runDisney in Orlando to runDisney in Paris… you don’t have to be as crazy. I didn’t need to get there an hour early. I didn’t need to freeze my butt off outside for as long as I did. If I *was* early I could have hung out inside the expo for a little while to stay warm, and then made my way to the corral closer to start time.

One cool thing they did before the race – The Genie showed up and surprised the finish line hosts to do a little warm-up. I was sitting down, and cold, so just watched the whole thing. They also showed us some trailers for upcoming movies… and did a great job of getting everyone pumped up for the race!

I LOVED THIS COURSE, YOU GUYS.

So, the race started out the same way that the 5K did and it was, challenging. A pretty small funnel of people with no place to really run. Luckily that didn’t last long and as soon as you hit the Disney Village you had plenty of room to take off.

You guys know. me, and “taking off” really isn’t my thing, so I just hung back and enjoyed myself. I had set my little interval timer and was looking forward to an easy 10K… I couldn’t wait to see what characters were out, and what cool parts of the parks I would get to see.

Well… almost immediately into this race I ran into two of my favorite people – Pamela and Jen.

Pamela is the one who designed the shirts Brandon and I wore the night before (and she’s actually designed a ton of shirts I wear regularly… just sayin’.) Jen is another friend who is responsible for my fabric and running skirt obsession… more on both of them at a later date!

I was so thrilled to run into them, we started talking and decided to all run together – and boy am I glad that we did!

Pamela’s husband was running ahead and scoring a spot in the character lines so we could all take a photo together… and we got some really great pictures!!

I finally understood what everyone was talking about when they said that Paris was the best for on course characters.

This race was Rapunzel themed – and every single character on the course was A LEGIT PRINCESS. So many princesses… it was SO SO SO FUN.

Here is a list of the characters on the course, let me know if I missed anyone:

I do believe that they did the same thing as the 5K and switched some photo areas between two princesses. So be aware that once you are in line, the character may change by the time you get to them. Don’t worry though, the cast members are pretty great at letting everyone know when a change is coming!

There wasn’t anything too special about this finish line, other than the fact I got to finish with some of my favorite people. Itis a pretty unique experience getting to finish the race inside the actual park, not something you get to do in the states!

The process was exactly the same as the night before… cross the line, get your medal, get your drinks, get your snacks, and head out of there! You end up leaving right outside of Walt Disney Studios, and it’s an easy walk over to Disney Village to head back to your hotel.

The snack box was pretty similar to the box we had the night before, I think there was one different snack – some type of rice cake with chocolate on it. I was too hungry and forgot to take a picture of those!

I will admit I wasn’t completely sold on Paris being that big of a deal after the 5K. However, the 10K sold me. I was SO impressed with the characters, and the course spent so much time in the parks… it was a total blast.

Even the times we weren’t in the parks, there was still a lot to look at that I had never seen before…